The recent Olympic games in Tokyo gave us everything. There was something captivating about these games, perhaps more so considering what everyone has been through over the last 18 months.

There were certainly plenty of things that we all learned from the games and has been eloquently put together by Martha Brook in the graphic below. 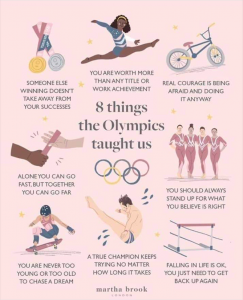 The Olympics provided so much of what is good about sport with many amazing stories, plenty of new sports for us all to be inspired by, the usual highs and lows, the topic of athlete mental health being brought firmly into the spotlight and probably more than ever before the media highlighting the personal stories of the athletes and the families behind the performers. For us the often unseen ‘village’ behind the athletes.

Behind every Olympian is an army of people whose help – whether in encouragement, chastisement, parenting, coaching, funding, or friendship – has shaped their character and provided stepping-stones to Olympic success.  The coverage on the television and social media channels showed us this more than ever before. In the past the parent’s story has been covered in the media but the intimacy of the scenes we saw this time around in people’s homes really struck a chord with viewers around the world.

This was so refreshing to see as the support, commitment and sacrifice made by parents is often unseen by many yet on the whole they are the most influential people in their children’s lives.

This support network is not just limited to parents, however, the village behind an athlete goes way beyond that. Grandparents and other relatives play their part, the story of Welsh boxer Lauren Price springs to mind with her grandparents such a key part in her sporting success.

There were the amazing scenes at the house party in Maidenhead as wider family and friends got together to support Tom Dean as he won Olympic gold in the pool.

Dean’s mother, Jacquie Hughes, told the BBC, “We didn’t invite anybody around until after the semis. Yesterday morning we just decided, because we couldn’t be there, how nice would it be for Tom to know that some of his family and his friends were watching him.

Tom went on to acknowledge the key role mum played and said that she deserved these golds as getting him up to 5am training was an epic feat in itself.

It wasn’t just in the Uk where families gathered to celebrate historic family moments. This is the moment that American wrester Gable Steveson won Olympic gold in the 125kg mens freestyle wrestling.

Sports clubs, coaches (including backroom and medical staff) teachers and friends also make up this group working together to help children and adults achieve their dreams and reach their potential.

Parents are the most critical supporters of any elite level performers because they are the ones who make the critical sacrifices to help them succeed. Most accomplished athletes discover their passion for their sport at a very young age. This is partly because parents are the ones getting their youngsters involved in sporting activities that fuel their love of sport whilst they also help to facilitate their children’s desire to be involved by providing all the tangible and emotional support required in the best way that they can.

This is something here at WWPIS that we care deeply about. Our passion and commitment is trying to support members of this village (organisations, coaches and parents to work effectively together to help young people fulfil their potential both in sport and beyond).

Parents certainly require help, support and encouragement. It is such a challenging role being a sports parent and just like parenting in general, many of us do our best based on our own experiences and learn from our mistakes as we go. However, we can do more in providing this support and it is great to see the large number of sporting organisations recognising the valuable role that parents play and beginning to improve and facilitate effective parental engagement programmes.

If we can help in any way to support your work with your parental engagement programme, then click here to get in touch.

Parents in Sport Podcast – ‘A conversation with Mark Maguire’

Your children are watching and listening to...

How do you motivate your children or...

Poor behaviour from opposition parents – how...