Latest Blogs
Sport Northern Ireland Project
Planning and hosting great parents’ meetings
For the Good of the Game Podcast –...
Parents in Sport Podcast – ‘A conversation with...
Co-host of the ‘Parents in Sport Virtual Summit’
How can we help our athletes and parents...
The Sport Psych Show with Dan Abrahams
Parents in Sport Podcast – ‘A conversation with...
Athletic Evolution Podcast
‘The Best’ – How elite athletes are made
Home Blogs It’s a long road…..
BlogsLong term athletic developmentMaturation- Early v Late Developers

The Developing Youth Track and Field Athletes Project started with a conversation with a parent. His 11 year old daughter had recently been successful in the high jump at a number of local events; she appeared to have an aptitude for the event and was really enjoying it. The father’s query was simple: given that his daughter had found something she was good at, was it appropriate to invest in her development? Specifically, would I be willing to supplement her twice weekly club training with a couple of individual sessions that were specifically focused on high jump? Would that be a good idea?

Here was a parent who wanted to do what was best for his daughter. He thought that she might have a gift for high jump, and believed that no gift can develop without support. He wanted to ensure that she had every opportunity to be successful.

I started by confirming what other sports this young athlete was competing in. Yes, her father replied, she was participating in a couple of other sports and enjoyed them, but not to the same extent as high jump. Perhaps, he said, now was a good time to focus on just one sport.

In my reply, I drew upon research which had been conducted on other sports. That research emphasised that relatively few successful youths progress to success as adults. Furthermore, while specialising in one sport, and indeed, in the case of athletics, eventually specialising in one discipline, was a normal part of the sporting experience for those enjoying competitive sport, that specialisation should occur gradually across adolescence. Eleven, I suggested, was too early to make an informed decision about specialising. In addition, there were many potential benefits for physical and social development to keeping up a range of sports through early adolescence at least. Although I cannot now remember what example I provided, I would also have pointed towards someone like England rugby star Jess Breach, who was a hugely promising and committed track and field athlete as well as a rugby player as an adolescent, and we can speculate, who’s cross sport experiences were likely to have been mutually beneficial.

I left the conversation dissatisfied. Much of the research I had quoted was conducted in complex team sports such as soccer. It would have been nice to be able to refer to some track and field specific data on youth development. On my cycle home, the Developing Youth Track and Field Athletes Project was begun.

The first study examined a number of questions using https://www.thepowerof10.info/ – a database detailing all athletes who achieve above set performance standards (in all cases, “success” is defined as being ranked in the top 20 nationally for their age category):

Here are the numbers that are relevant to our story. Only 9% of top senior males and 13% of top senior females had been ranked in the top 20 as Under 13s. Indeed, even at U15 level, 60% of men and 49% of women who would go on to become top ranked seniors were still not listed on the database; that is, they were not yet competing in athletics, or not yet performing at a standard high enough to be ranked.

Of those athletes who had been top ranked as Under 13s, over 70% were no longer listed on the database as 19 year olds. Only 11% of males and 15% of female athletes were still ranked in the top 20 as 19 year olds, with perhaps the most difficult transition across age groups still to come. These findings reinforce the message that excelling at youth level in competitive athletics is not a prerequisite for senior success.

When all Under 13 athletes (females on the left; males on the right) ranked in the Top 20 at that age grade were followed through to Under 20, we found that the majority were no longer listed on the database at age 19; very few top performing 12 year olds were also top performing 19 year olds.

Our second study in the Developing Youth Track & Field Athletes Project explored why there was such a weak relationship between youth and later success. Specifically, we focused on relative age. While we can expect approximately 25% of athletes to be born in each quarter of the year, 41% of all female Under 13 high jumpers ranked on the Power of 10 had been born in the first quarter of the year, and 12% in the fourth quarter. When we examined those athletes ranked in the Top 20 at Under 13, 48% were born in quarter 1 and less than 6% in the fourth quarter. Clearly relative age had a profound influence on who was successful within youth track and field athletics. 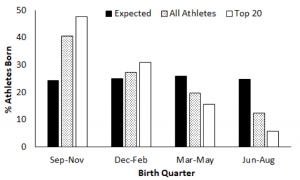 Relative age effect in Under 13 female high jumpers. Data from 1665 athletes active between 2005 and 2015. All athletes refers to everyone achieving a minimum standard to be ranked on a national database. Top 20 refers to those athletes ranked in the Top 20 on the database.

Based on the above, the best advice for parents is:

Phil Kearney is the Course Leader for the MSc Applied Sports Coaching at the University of Limerick. His teaching and research focuses on the domain of skill acquisition, and he is a co-founder of Movement and Skill Acquisition Ireland. Phil is also a level-2 athletics coach working primarily in the youth participation context. You can find out more about Phil and his work by clicking here to visit his site.

How to make the most of coaching...

How Praise Became a Consolation Prize