Latest Blogs
Podcasts and workout music for lockdown and beyond
Parents in Sport Podcast – ‘A conversation with...
Creating a Positive Parent Culture – Our hopes...
Your children will be watching you……. I promise!
‘The Parent Coach’ – managing the car journey...
‘The Parent Coach’ – different to being just...
Parents in Sport Podcast – ‘A conversation with...
British Gymnastics Symposium 2021
Launch of Football Academy Programme
10 things that require zero talent – are...
Home Blogs Your child does not want to play! What do you do?
BlogsCreating a positive environmentDrop outMotivating children

Your child does not want to play! What do you do?

I could not believe what I saw, my own child buzzing the day before after an amazing training session and less than 24 hours later, he was back in my lap saying he did not want to do this anymore.  Was this I do not want to do football anymore?  Surely not after the huge success of the day before?

My child was only 7 at the time and its a story that has resonated with me several times in the years that have followed, and I felt the need to now tell the story.  How many of you as parents have struggled to get your child on the field or even get them out of the house to get to training or their match?  How many of you know your child is not feeling 100% but have taken them to training or to their match regardless?

After some lengthy negotiation I tried to get him back on the field but failed miserably, he was just not having any of it.  I should have left it alone at this point but of course I did not.  In the car on the way home all I could do was ramble on about it.  I gave him a hard time for dropping out, complained that we were giving up time to take him and could I get an answer out of him as to why he didn’t want to take part, of course I couldn’t.

The following week took a similar line, fine at his other football session in the big city, back to the local village hall and he did not want to play.  A repeat of the last week followed, blame as to what he had done in the day- was he too tired?  Why didn’t he want to play- still no answer.

It was clearly not a football issue as he had played the day before.  It had to be something to do with the environment and what was going on.  We tried one final time the week after and with the same outcome, at that point we never returned.

Our son was clearly not happy and enough was enough.  It did seem a rather big coincidence that he was fine in the local hall until he then experienced something better and more enjoyable. Surely a seven year old could not work out what constitutes a good coaching session or a bad one?  I thought long and hard about this.

What I do think a child can work out is which one of the sessions is more fun.  There you have it, the whole success criteria for him was not about scoring goals or attending the session his parents wanted him to but the one he enjoyed the most. Once he realised what fun there was to be had out there he did not want to go back to something less stimulating.

Who can blame him.  As adults we certainly wouldn’t so why should a four year old? This does however open up a very interesting debate.

At what point do you listen your child and stop doing a given activity?  If your child does not want to go to their sport or does not want to do it at such a young age they should not be forced to.  It could have have major long term negative implications.

If they are clearly not up for it on a given day, do you adopt the stance that they need to see it out or do you bow to their demands? My view is that if you commit to something you should be encouraging that in your children. If you have signed up to something for a block of time or have committed to a team for a season, you should see that out and then if the child is still not happy then drop out at the appropriate time.  Others may have very different views on this……

From experience however and watching other children who have turned up to training or matches in the wrong frame of mind there is no real positive.  The child operates at a far lower level than normal, the child is frustrated and the parent on the side even more so.  In fact the whole time is spent with the parents blood pressure rising by the minute and this can only end in a bad way, negatively for both child and parent. 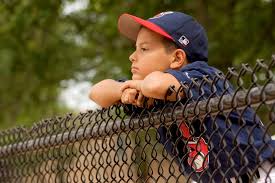 So, what do you do if your child is not 100%?  The reality is that your young child often during the course of the season will not be 100%, however if they are ill or have been ill what do you do?  Once again many can get caught up in the pressure of the situation rather than making a well informed decision.  If they miss their training session will that reflect badly on my child?  If they miss a match will we struggle to be selected for the next one?  Will my child missing be perceived as showing a lack of commitment?  Of course none of these questions should be relevant, but these gremlins can run through parents minds.

Regardless of any of the answers to the above, the fact is if your child looks ill or has been ill you should not take them to play in any sport.  It is cruel, they do not play anywhere near the level they are capable of and you risk them being both off sport and their school for a much longer period of time.

We have all been there as parents having to make a decision if our child is well enough to go to school or perhaps participate in the school play. In many ways our own disappointment clouds our decision making process that we will not be watching the match or play, rather than taking into account what is in the best interests of the child.  I am yet to see any child who has been ill or is feeling ill on a day ever perform well in a match or training session around that period of time.

As I mentioned earlier the experience in our local hall would have you say, ‘But you took your child three times to a session where he was clearly not up for it?’. However, this was not through illness and sometimes as a parents we have to try not to have knee jerk reactions or allow our child just to pick and choose when suits.  This means discussing it with them, trying again in the short term as there could be a number of reasons they do not want to attend.  Someone has said something mean to them?   Are they scared of someone in the group?  Have they misunderstood something a coach has said?  All of the above can easily be rectified with the correct management and your child would soon be back in the activity.

A new environment for young people can often cause a feeling of fear and as parents we have to be in a position to try and understand and manage this.  A couple of years later we moved our own child to a much bigger and very different environment.

The sheer scale of the environment took its toll and despite a great first week, weeks two and three proved really defining moments. Week 2 I think we got our son to participate in part of the session and week 3 was looking a real write off.  We had driven 45 minutes to this session, given up a lot of time so as you can imagine the frustration levels were rising. Lots of other parents watching, judging you as you struggle to get your child to participate.

Fortunately in week three I was not there and it was just my wife.  10 minutes into the session and still unable to get our son onto the pitch she turned to him and said, ‘this is your last chance, you either play now or we go back to the local sports hall and we go home and throw away all of your footballs.’

I must stress here that my wife is one of the kindest, caring people on the planet.  This was not normal behaviour for her at all, something had tipped her over the edge, the beautiful world of sports parenting.

Fortunately, from that moment on our son joined in and has never looked back.  He has never not joined in a session, has never had a fear of having different coaches, playing with different boys and playing in different environments, for him it is now just playing.

Were we right to adopt this hard line stance? That is debatable.  The fact is children of that age do not know what they really want, they have fears that we may not understand. Should we let them bail out at the first sign of fear?

Probably not, but we need to guide and support.  Of course continued fear and not wanting to participate should lead you to think twice about forcing your child, but that does not mean your child may not like that sport or environment ever.  It just means that at that point in time they may not quite be ready for it.

The next time you are having a problem getting your child to their sports event, or you fear that they may not be 100%, I hope that you may be able to seek some comfort in our experiences, and make some really well thought out choices.

Good luck, you are not alone……

Based on the above the best advice would be:

Over-training injury and understanding the risk

How can you help your child prepare for their big sports event?

Tips for parents to foster a growth...

How can we help prevent drop out...

More the connectivity, less the affection

Finding a strength and conditioning coach