Loris Karius – The one thing all parents and coaches should know 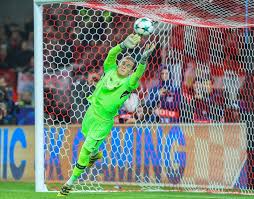 The 2018 UEFA Champions League Final will be remembered for two things.

Gareth Bale’s amazing, instinctive overhead kick, and the mistakes by the Liverpool goalkeeper Loris Karius, which turned out to be the difference between the two sides.

The reaction to the mistakes was predictable. Derision on social media. Questions about the amount of money professional footballers are paid. Judgement and opinions that the ‘keeper’s performance would ‘haunt him for the rest of his life’.

All of which suggests that many of those who watch and comment on sport have a somewhat limited understanding of how our minds really work.

Despite increased curiosity and attention on the inner game, we don’t understand true nature of the human experience.

Is ‘state of mind’ important?

More and more is written and spoken about the mental side of the games we play. Even in junior sport more attention is being given to what is going on in ‘the top two inches.’

This has led to confusion for both parents and young athletes over where the line between enjoyment and player wellbeing, and performance should be.

‘Mental performance coaching’ has become a big business, offering techniques and strategies to individual athletes and teams to try to boost performance. Coaches and players look to find a competitive edge, to reduce or eliminate mistakes such as the ones which happened in the final.

To my mind, sports psychology is a discipline built on extremely shaky foundations.

The premise seems to be, that by controlling thoughts and feelings, athletes are more likely to attain a state of mind where a good performance is produced at will, and bad performances are less likely to occur.

This idea is highly questionable.

There is an assumption is that one particular state of mind (positive, relaxed, confident etc) is better than another in terms of sporting performance.

There is a belief that human beings can in control the content of the thinking which comes to them from moment to moment.

Most athletes can remember a time when they didn’t feel great, but produced a good performance nevertheless.

Every athlete can remember a time when they felt relaxed and confident but for some reason, they didn’t play as well as their state of mind suggested they should.

Therefore, is the proposition that you need to be in a particular state of mind in order to perform well a valid one?

Surely the definition of mental toughness or resilience is the understanding that your thinking  or your state of mind has no power to affect or limit your performance?

“To err is human”

As for the second theory, you can test this yourself. Sit still for one minute and think of nothing.

How did you get on?

Still believe you can control your thinking?

And we can only act in accordance with the thinking we have in the moment.

How could a human being ever make a mistake, take a wrong turn, forget someone’s name, hit their own thumb with a hammer, miss saving an easy shot, if they were in control of their thoughts, feelings and actions?

Imagine what sport would be like if every single player and coach always thought and played perfectly and never made a mistake?

The human organism is made up of thousands of different chemical reactions, biological processes and functions.

How many of those do we have control over?

Blood pumping through our veins? Food being converted into energy. Our immune system fighting off infection? Reflected light being realised as images via our eyes? Falling asleep when we are tired? Waking up when we are rested?

But hey! There are two things out of the thousands we do control.

Our thoughts and our feelings.

Really? Does this make sense? Why only these two?

The truth is, we have far less control of thought and deed than we, let alone coaches and psychologists would like to believe.

When we see that this is the case, would it make us more or less likely to judge, criticise, blame or reproach a player, coach, referee or even ourselves when our performance, or that of our children isn’t matching our expectations?

The one thing we need to know

Whenever a human being is struggling, it is for one reason, and one reason alone.

They have forgotten who they really are.

They have mistaken their personal thinking, the story they are telling themselves about who they are, for the true entity, awareness, which is the fundamental, consistent element of the human experience.

The player who is upset at a mistake which resulted in her team losing has forgotten who they really are.

The coach who vents her frustration at the perceived lack of effort from a key player has forgotten who they really are.

The parent who angrily berates a young referee over a decision which cost his child’s team a place in the final has forgotten who they really are.

This veiling of our true nature is entirely innocent. It is an essential aspect of experiencing the world of form.

It is inevitable. In the heat of the moment we get caught up and we identify with the thoughts, feelings and emotions running through us.

No player wants to make a mistake.

No coach wants to judge or criticise a player’s motivation.

No parent wants to lose their cool on the sideline.

Yet all of these things happen, week in, week out, despite hours of training and practice, despite reading books and attending seminars, despite codes of conduct, rules and guidelines from governing bodies.

We have to look at the level of understanding, of which the behaviour is the visible symptom..

When we understand, behaviour changes. When we understand that who we are is awareness itself, not our experience, our thoughts, feelings and emotions, blaming ourselves, judging others, getting angry and frustrated just doesn’t seem to make sense any more.

You are not your experience

The Liverpool goalkeeper will no doubt have some sleepless nights. Whenever he thinks about the game no doubt he will have some feelings of frustration, embarrassment, anger and sadness.

Resistance to ‘what is’ always feels painful.

If he believes those events ‘define him’, then yes, he will struggle.

But when those memories move on, to be replaced with other thoughts, his feelings will change.

The feelings are not coming from the event, from the situation or circumstances of our lives.

How can something which happened in the past cause a feeling in us today?

It can’t. If it could wouldn’t we feel that way all the time ?

Could it be the thought which causes the feeling, not the event itself?

We are not the story we are telling ourselves about who we are.

We are the awareness of that story.

When we see the truth in this, everything else becomes clear.

There is nothing to do

The knowing of our true nature, our true being, is the knowledge on which all other knowledge is based.

It is the first thing every coach and parent should remember when they or their child starts to struggle.

If asked what advice I could give to the family and friends of Loris Karius, the answer would be simple.

There is nothing to do, no strategy to follow, no technique to implement.

We just need to remember. From the point of view of awareness, we are one being, we are connected, we are love.

From the perspective of the true self, we see that struggle is simply a symptom of misunderstanding, rather than a flaw or character defect which needs to be fixed, avoided or coped with.

Free to play, to love,to enjoy, to compete, to win and to lose, safe in the understanding that no outcome or result can damage or affect who we really are.

This is the understanding that sport and life are constantly pointing us towards.

Because it is the only thing a human being really needs to know.

Sam Jarman is a PGA Golf Professional, Coach and Author. He advises individual players and athletes, teams and coaches in a number of different sports.

He also works with people in businesses, schools and other organisations to help them realise their innate mental health and well being.

You can find him on twitter @samjarmangolf or at www.sportsprinciples.com

Behind every great player

Perform Beyond Pressure – A Parent’s Guide

Stuart Lancaster – A few thoughts on...

How can you help develop resilience in...

What can we do to change the...