Latest Blogs
Engage – Coaches Workshop – How to build...
What makes playing sport fun is…..
Parents in Sport Podcast – ‘A conversation with...
Globetrottin’ ADs
Helping our children navigate their return to sport
Parents in Sport Podcast – Launch of Season...
The Poolside Pass
PODCAST- ‘What does an ideal parents meeting look...
Coaches – Set the tone and allow parental...
PODCAST – Preparing the ground for those crucial...
Home Blogs How to make the most of coaching your own child?
BlogsCreating a positive environmentLevel of InvolvementMotivating children

How to make the most of coaching your own child? 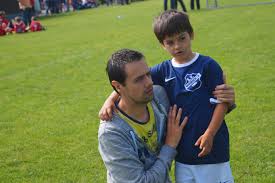 At grassroots level thanks to all the help given by wonderful parent volunteers there is the scenario that the parent may end up being responsible and coaching their own child as part of a team.

It is a wonderful opportunity for parent and child to bond further, an opportunity for the parent to be actively involved in their child’s life and most importantly a chance to create great memories for the years to come.

I remember fondly the time my own father spent coaching me ‘mini rugby’ when I was between the ages of 6 and 8 and I can still picture him now kitted out in his tracksuit smiling and encouraging all that wanted to participate in the game.

Unfortunately coaching your own child is not always a positive experience.  We are here with a few helpful tips to ensure that the shared experience is a positive one.

” The major positive aspect includes being able to spend quality time together. Additionally, your child perceives that he/she gets special attention, praise, and perks, such as being on familiar terms with the coach. In the child’s perception, having you as a parent as a coach is an opportunity to receive motivation and technical instruction that others on the team do not get. In the perspective of the parent, being both coach and parent provides the opportunity to teach values and skills, the opportunity to see how your child interact with friends, and the ability to see your child’s accomplishments and take pride in them” – Weiss & Fretwell 2005

I’ll finish by saying enjoy the experience and without parent coaches we would have no game and most teams wouldn’t even exist. My advice is don’t coach your own child forever. It’s great at the younger ages but there is a time to step away and just watch them play. I would suggest that you devote some of your time to just being a dad or mum (supporting from the sidelines) and when it’s time to let go (as the coach), let them go.

How to make the most of coaching your own child? was last modified: March 30th, 2019 by Gordon MacLelland
coaching own childParent coachpositive environment
1
Facebook Twitter Google + Pinterest

What to do when a case of parent peer pressure strikes?

The dangers of the car journey home

Your cost of wInning

How to effectively manage coach, parent, and...

Sport is a mental game

How are you doing as a sports...